Just recently, on June 17, The Newest Flower was featured alongside several other books by Maine authors to fundraise for the Maine Children's Home for Little Wanderers, which also happens to be the organization receiving all the book's profits.
The event, There's No Place Like Home, by the end, raised nearly $30,000! With this money, the Maine Children's Home will continue their impact in the surrounding communities and programs, including their various efforts in the adoption and foster care systems.
Once again, in my mailbox, I received another lovely thank you note, and I wished to share and extend the thanks you readers as well. Many of you have watched and supported this book's journey, and I hope each of you realize the effects of your contributions. 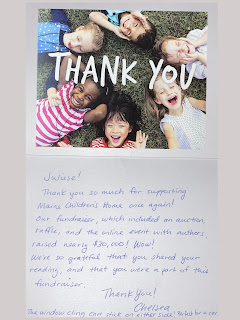 If you are interested in learning more about the Maine Children's Home for Little Wanderers and its mission, visit their site at https://www.mainechildrenshome.org.
at July 17, 2021 No comments:
Email ThisBlogThis!Share to TwitterShare to FacebookShare to Pinterest
Labels: In My Mailbox

Recently, I was given the opportunity to share my book The Newest Flower to a lovely 2nd grade class through Zoom. To my surprise, in my mailbox barely a week later, were several lovely thank you letters that I thought I’d share, in hopes that they make you smile as much as they did me. 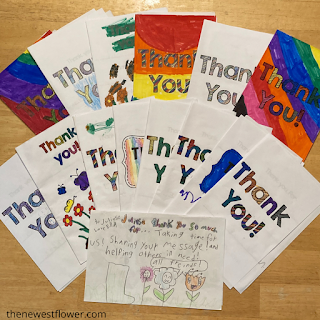 ”Thank you for telling us about adoption.”

”Thank you for sharing your message [and] reading to us.”

”Thank you for raising $ [money] to help those in need”

”Thank you for putting extra fun in with the find the creatures challenge.”

These type of responses, along with educating our future generation about loving each other regardless of appearance, is my favorite part of being an author, and I thank each of you readers for allowing me this type of platform.

P.S. If you are interested in arranging a speaking engagement with me, feel free to leave a comment or use the contact form to get in touch!

at June 04, 2021 No comments:
Email ThisBlogThis!Share to TwitterShare to FacebookShare to Pinterest
Labels: In My Mailbox

"I Am What Happens Next"

Titles, while important and useful, have a sense of permanency, as if once they are there, the subject incapable of being changed. But as a writer, I know that a single word cannot define anything completely, so titles, in their simplest form, are merely structures to what has already been developed.

However, throughout time, this has been reversed. Suddenly titles aren’t something that describe who we are, but instead, they define who we are. In the adoption community, this truth is even more evident. Here, it is easy to see that adoptee is not just a characteristic, but has become a part of personality.

This seven letter word, adoptee, supplies the gaps left by answers unreachable, parents not present, and the hurt held onto. For an adopted person, this word is a shield used to cover up the missing pieces they see in their life. Except, along the way, this shield has morphed into a prison. And the saddest part is that they have the keys to unlock it, if only they realize what lays beyond.

What lies beyond is not a life where adoption doesn’t play a key, because as long as they live, adoption will be an aspect of life - a part of their story. But, if brave enough to unlock the prison door, this title adoptee will no longer have the ability to dictate control over life.

So dear reader, if this applies to your life, let me be your guide. As I tell my story, I hope you grip your key and take the step to unlock your prison.

My journey brings us back to the origin place, where in the past, the hurt began to manifest and seep into my identity. This is the point where the “adoptee complex” truly begins. For me, this is in what I suppose to be a slightly overpopulated outdoor waiting area of the local hospital. Around are the rise and fall of citizens conversing in Mandarin, everyone coming and going just as do the conversations. This is the city of Guangzhou, and this is where life as I know it began. And this is where I must return to.

Sitting in one of the colored chairs is a younger version of myself. However, she is not the six week old infant that would match this setting. Instead, I am faced by a toddler, about three years in age, the version of me who is about to be adopted. My hurt, something I protected with the shield of adoptee, stems from the setting. But my complex stems from what is about to take place for the toddler version of myself. Both of these elements are equally important, and both need to be reconciled with.

“What happens to us next?” No longer is the toddler alone, but instead, she’s gesturing at a small wrapped baby who lies on the hard chair, seeking medical attention. Along the way, this small child has become the protector for the helpless baby, and right now, the shield protecting them is the title orphan.

But they don’t need a shield, and you don’t need a shield that will eventually morph into a prison. Instead, it is your job to face your younger self, who represents your first shield you used against the hurt, and speak the truth.

So to me, I must look at my younger self and answer her question to the best of my ability, to ease her and subsequently, free myself.

“I am what happens next.”

For all my imperfections, for every mistake I have made and will make, every aspect of my life, including but not limited to my adoption, is what happens next, and while it’s not perfect, I look at how far I’ve come since I was a three year old. Look at all that and ask, “Do I need my former self trying in vain to define what happens next when she doesn’t even know who I’ve become?”

I hope your answer is no, and I hope that you have the ability to be completely honest with yourself. By reflecting and speaking these truths until you believe them, if you are in a prison, you have the key and the courage to step out of it.

at May 07, 2021 No comments:
Email ThisBlogThis!Share to TwitterShare to FacebookShare to Pinterest
Older Posts Home
Subscribe to: Posts (Atom)